Which Is Better for Your Business: Facebook or LinkedIn?

There are several ways to reach your audience on two of the largest social media networks, Facebook and LinkedIn. The question remains: Which one should you concentrate your efforts on?

Below, we’ll go over each platform’s advantages and disadvantages. 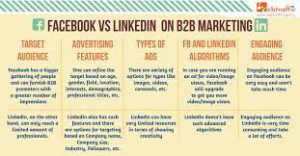 At its foundation, LinkedIn is a professional network that was first developed as a tool for corporate hiring. Today, it offers features akin to those on conventional social media platforms, such as status updates, blogging tools, and private messaging.

On the other hand, Facebook was explicitly created as a platform for communication and sharing. Although the “sharing” component is its main selling point, it also has many other functions that help companies reach their target consumers.

In fact, according to a Facebook survey, 74% of American shoppers use the site to find new brands and goods.

LinkedIn and Facebook offer the Groups feature, which enables you to interact with others who share your interests, and they both have effective ad platforms.

What are the main distinctions between the two, considering their shared features? We’ll talk about those now. 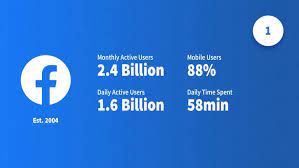 According to Statista data from 2021, the largest age group on both sites is between the ages of 25 and 34. On the other hand, Facebook users span a more excellent age range, with 10% being either younger than 18 or older than 64.

This is because Facebook hosts the general public, whereas LinkedIn primarily serves professionals wishing to network.

Furthermore, according to HubSpot’s 2020 State of Marketing Report, out of 8 platforms, LinkedIn has the fourth-highest return on investment for marketers.

As previously noted, business-minded people frequently visit LinkedIn. As a result, it’s a fantastic platform for firms that cater to businesses.

The reasons are as follows:

Brands that seek to approach consumers directly could find Facebook to be more effective. Additionally, you have access to 10 times more prospects and a fantastic location to increase engagement with your business. Therefore, LinkedIn wins when creating actual leads, even though Facebook has the advantage in terms of numbers. 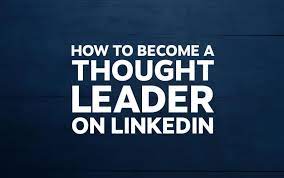 One method for brands to increase their awareness and credibility is through thought leadership. According to Survey Monkey’s 2020 Thought Leadership Report, 66% of marketers rank it as one of their top priorities for their marketing team.

After giving the two platforms a brief overview, let’s examine some of their most critical business-related aspects in greater detail. 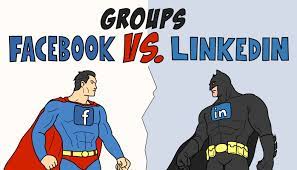 Enterprises can network and engage with prospects and other like-minded businesses using the Groups function on LinkedIn and Facebook.

However, it’s important to consider users’ intentions on various websites. There is a good possibility that people who interact with one another in LinkedIn Groups are linked to their jobs.

On the other hand, people are more inclined to express their personal opinions in Facebook Groups on anything, from politics and hobbies to lifestyle and food.

To choose the Groups feature that is appropriate for you, consider the audience you intend to reach.

For instance, Facebook Groups is the best option if you want to reach consumers interested in cooking because you’re selling the newest food blender.

LinkedIn Groups might be a better option if you offer a high-end service to top-tier management professionals. 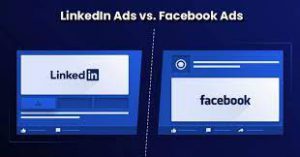 Carousel, video, and lead advertising are just a few of the many ad types that Facebook and LinkedIn offer. Your ads can reach a broader audience on Facebook because of their excellent user base. Facebook also allows you to target users based on specific data, such as behavior or significant life events. However, LinkedIn provides its targeting options and excels at generating business leads.

Let’s finally talk about the advertising component of both sites.

Both platforms have very much reached parity in terms of variety.

Each provides an accessible ad manager. This implies that you may begin arranging your creative assets on a content marketing platform like Casted and then create your ad on either LinkedIn or Facebook in just a few simple steps.

If you believe Facebook can target a larger audience, you are correct. This does not, however, imply that LinkedIn needs more effective targeting options.

Both platforms prioritize user input and deliver adverts and content pertinent to their users’ data.

Both platforms also allow businesses to employ source audiences to connect with customers compared to their current clientele. LinkedIn refers to it as “Audience Expansion,” while Facebook refers to it as “Lookalike Audience.”

Finally, it’s critical to take the price into account.

WHO WINNING? Your Choice

While Facebook and LinkedIn may have some similarities, it is apparent that they serve pretty distinct audiences and have very different goals.

Which one you choose to employ entirely depends on your sector, the audience you’re attempting to attract, and your marketing objectives.

It’s also crucial to remember that you can decide without making a decision. You could utilize Facebook to build brand awareness and interact with customers. At the same time, LinkedIn is used for a targeted lead-generating effort.